"Everybody knows a work of art takes at least an hour!" Lucy to Linus, (Peanuts)

Back After a Long Absence 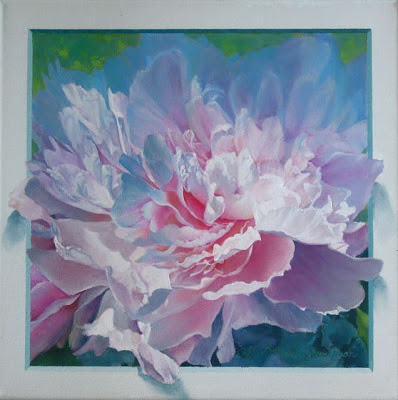 I know, I know. It's been a really long time since I last posted. I'm not sure what happened except that I felt the need to pull back and hibernate a bit this winter. I didn't even post a "see you a bit later" message. That was kind of rude, I now realize.
Depression is something I have dealt with most of my life and there are times when it is worse than other times. I wasn't in the depths that I have suffered in the past but just down enough that I didn't even want to look for some light. It made working in the studio quite hard so I had to make myself go out there, at least once in a while, to justify to myself the whole point of having that beautiful building out there, made specifically for the purpose of making art.
In early December I was asked to show with another woman who lives in a remote area (much more remote than where I live), Yvonne Maximchuck. She paints in watercolour and acrylic and since I paint in oil we decided to simply call our show "Oil & Water". (I sneaked in a couple of pastels at her suggestion at the last minute!)
The Pearl Ellis Gallery in Comox, BC, is a volunteer run gallery and has been around for thirty years, a remarkable length of time for this kind of operation. They used to be housed in the downstairs and around the back by the parking lot room of the building where the Comox Library was. Two years ago a beautiful new library, facing toward the Comox bay, was built and the upstairs space of the old library became available. The town decided to lease the space to the Pearl Ellis Gallery and it has made the fortunes of the gallery so much better. Now they are right on the street for anyone to see and bring it many more people. I had originally not thought much of the gallery, especially being so out-of-the-way; I didn't even know about it for the first few years I lived out here. Then I exhibited in a couple of group shows there and to my surprise I sold some things! That's what I get for turning my snobby nose up at a so-called lesser venue! It taught me a good lesson, the one we all learn as children which is to not judge a book by its cover. I am now a proud ongoing member of the Pearl Ellis and happy to be in this show right now, which goes on until March 3rd. Last weekend we had a reception, meet-n-greet the artists afternoon and had a very good turnout. Yvonne sold a piece and now so have I (see painting above).
Below are some photos taken at the meet-n-greet of me and Yvonne, plus from the workshop I gave in the downstairs space last saturday. I called it "The Magic of Cast Shadow" and sent away for a professional type lamp to light the model. Unfortunately there was a lot of ambient light also in the room so my cast shadow was not as strong as I had hoped, but it served the purpose and the eleven students seemed pleased with the class in any case. The only unfortunate occurrence was when one quite elderly lady (who has been a longtime watercolour artist in the Comox area) accidently fell and had to be taken to hospital. She had fractured her pelvis it turns out and that saddened all of us. She is going to be ok according to her friend's report. It gives one pause to consider what growing old will mean for any of us as working artists and all we can do is keep at it with joy in whatever capacity we can and not let infirmity dictate the love of making art if at all possible. I give Dorothy so much credit for signing up for my workshop even though she is old and frail. I took her hand before she had to leave with paramedics and expressed my happiness that she had come and my sorrow that she was leaving early. She said she was also sorry she had to leave early and I could see it in her eyes. I am going to make an art card for her and send it next week.
Thanks to those of you who have followed me and will continue to do so in spite of my hasty retreat last November. I have missed everyone and I need to return to some discipline regarding this blog. Looking forward to future interactions with you all again! 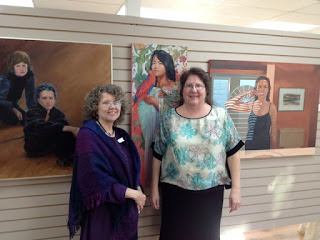 Me and Yvonne in front of my work 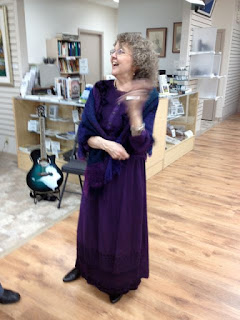 caught offguard at the gallery:-) 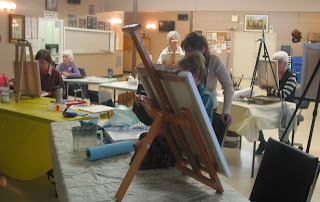 some of the students at the workshop 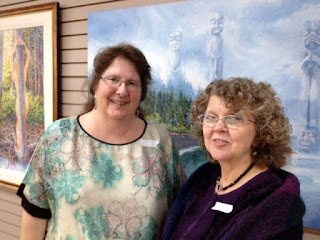 Yvonne and me in front of her work 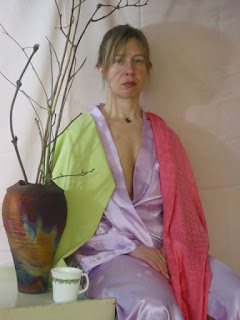 model for the workshop 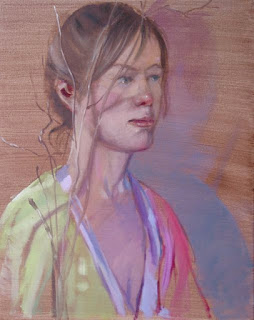 my demo painting for the workshop

Posted by Karen Martin Sampson at 11:32 AM

Welcome to my Blog

Please remember that all posted images on this blog are copyrighted and not for use without written permission. I hope you enjoy stopping by and please leave comments - I will respond! To see my site just click on my picture and you will go to karenmartinarts.ca, and please consider signing up for my newsletter which I promise not to send too annoyingly often...thanks!

we are in
CanadianPlanet
canada's directory

Karen Martin Sampson
In the last third of my life and finding I am braver now. My second husband, Bob, is my helpmate and my love. My grown son is a blessing and a friend. Bob's daughter and grandson are now part of my loving family. I care deeply about our planet, advocating for those who are helpless, and animal rights, but mindful, even selfish, of my need for solitude, time at the easel, and with my books. There are times when being an artist is hard, frustrating, and not paying too well. Mostly there are times when it flows, invigorates, and offers serenity. Then there are my surroundings in which I am so blessed here on North Vancouver Island; mountains, ocean, forest, wildlife - it is all so amazing to this mid-eastern born and raised girl! Many mornings I join Bob with our four dogs for a hike up the mountain trail. There is a group of us who meet Tuesday mornings to work from models and the community of fellow artists is important to me. There have been trials and problems along the way but on the whole I think I must have done something right in my former life. Wishing good karma, love, and fulfillment to my fellow earth travelers.