"Everybody knows a work of art takes at least an hour!" Lucy to Linus, (Peanuts)

Another month gone by! It truly does seem like time is moving faster as I get older, but that is a topic for another posting I think.
The above image is from the four hour workshop I gave last month at the Pearl Ellis Gallery. The model was great but the room, in terms of lighting control, was difficult. It was supposed to be about cast shadows but I couldn't obtain the strength of shadow that I was going for. Still, the day was good and the results not too bad, considering. I would like to go back into this piece and make some changes but I don't know if I will bother. I never seem to have the ideal set up for use with live models. Maybe if I knew what the "ideal" setup might be I could actually make one.
I ended up staying out of my studio for practically the entire month after the show was over. Rain, chill, mild depression, all working to encourage a cleaving to womb-like homebodiness. Lots of reading going on. FaceBooking taking over hours of my day and staring out of windows. The moment arrived when I was sick of it all and I made myself start to think and do things again. First some somewhat serious housecleaning, both physically and mentally. Clear  out the cobwebs! Repairing and revamping stuff;  looking into cookbooks and actually making some interesting meals. A trip to the neglected studio and a day spent rearranging, put away clutter, hanging paintings sitting around on the floor, and scrubbing the bathroom. And then the sun began to appear every so often. Work in the garden! Weeding, pruning, raking. Helping Bob restore the depleted wood pile so we will be ready well ahead of time for next fall. That new, very efficient woodstove in the basement heats almost our whole house and has saved a small fortune in oil heating and electricity bills! We have enough deadfall and aging Alders to give us wood from our own property for a long time to come, and still leave plenty of beautiful trees to enhance the place from all the evergreens. I've been reading about Alders and how beneficial they are to a forest eco system. They are fairly shortlived but they add nutrients and are a catalyst to the growth of many other tree species. And they reproduce and grow quickly, unlike the other trees which need years and years and should be left alone to mature. And they are pretty! I really should consider doing a painting to celebrate this underrated and even maligned tree! 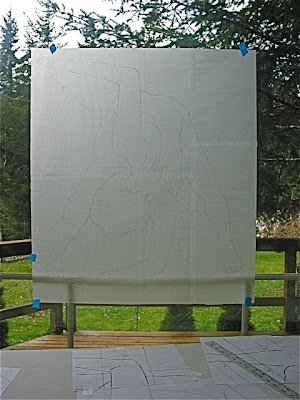 I started to hit the studio again finally this week and started a larger version of "Pushing the Envelope". The show that the small version (12"x12") went to got postponed because several pieces meant to go in the show were held up by customs at the US border. The exhibit, "Raining Women's Voices" will go on in June and this gives me time to reconsider the piece and do the larger version (36"x36") I had initially been planning. Above my semi final drawing/cartoon (as in the Renaissance meaning of "cartoon") is taped to one of my studio windows for appraisal. I had to put several pieces together from the small enlarged sections. I gridded the piece but also used the copier/enlargement machine and managed to calculate the needed size exactly to fit my larger canvas. 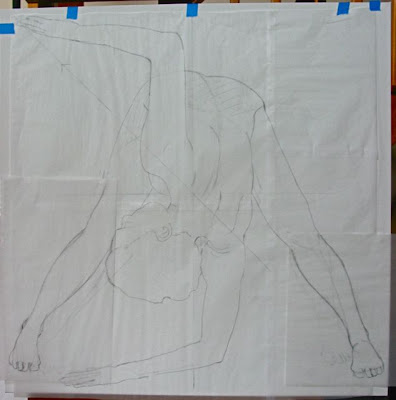 Now the decision about changes (or not) in placement of feet is in process. My first idea was to have hands and feet at the outer edges of the canvas, almost reaching to move out of the canvas, as above. (I know, these images are quite light but I am unable to increase the contrast any more than this). It means straightening and slightly lengthening the legs. I'm not opposed to a little distortion even, to serve the greater purpose:-) 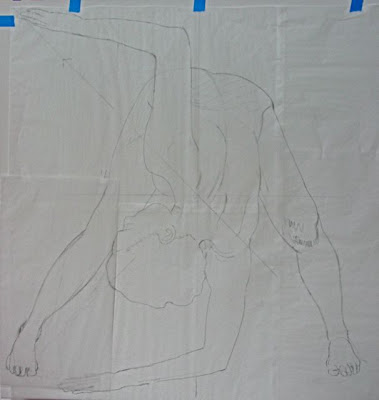 Here I have only moved one foot out to the edge and allowed the other to remain as in the original pose; I kind of like the bent knee foreshortening. 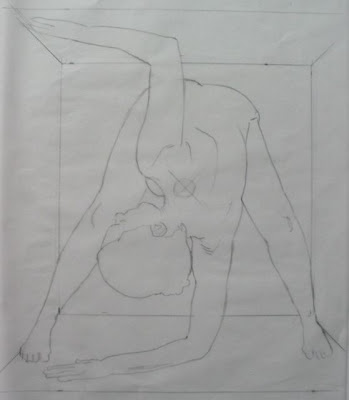 This is the original pose with hands near the canvas edges. The feet are away from the edges, along the inside-the-box perspective lines. Placing feet at the edges would interfere with this perspective so I would probably not paint the sides and back of the box - just leave it amorphous, concentrating on the emphasis on the frontal edges of the canvas. Anyway, I know what I mean even if no one else does...
The decisions are taking some time. Paint the inside light or dark? Utilize the perspective or not? Feet in or out, or one of each?
Time to go split some more wood. I think it might be saving me.

Welcome to my Blog

Please remember that all posted images on this blog are copyrighted and not for use without written permission. I hope you enjoy stopping by and please leave comments - I will respond! To see my site just click on my picture and you will go to karenmartinarts.ca, and please consider signing up for my newsletter which I promise not to send too annoyingly often...thanks!

we are in
CanadianPlanet
canada's directory

Karen Martin Sampson
In the last third of my life and finding I am braver now. My second husband, Bob, is my helpmate and my love. My grown son is a blessing and a friend. Bob's daughter and grandson are now part of my loving family. I care deeply about our planet, advocating for those who are helpless, and animal rights, but mindful, even selfish, of my need for solitude, time at the easel, and with my books. There are times when being an artist is hard, frustrating, and not paying too well. Mostly there are times when it flows, invigorates, and offers serenity. Then there are my surroundings in which I am so blessed here on North Vancouver Island; mountains, ocean, forest, wildlife - it is all so amazing to this mid-eastern born and raised girl! Many mornings I join Bob with our four dogs for a hike up the mountain trail. There is a group of us who meet Tuesday mornings to work from models and the community of fellow artists is important to me. There have been trials and problems along the way but on the whole I think I must have done something right in my former life. Wishing good karma, love, and fulfillment to my fellow earth travelers.